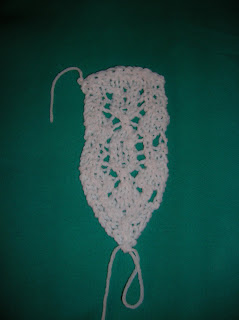 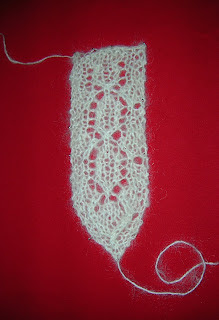 This bookmark was inspired by one I saw in the book Joanne Yordanou’s Twelve Months of Knitting. I wanted to make it for my secret pal in the Intercambio Aracnido. But later on, while leafing through A Treasury of Knitting Patterns I came across the spider stitch. Immediately I decided that I would make the bookmark, but in the spider stitch in keeping with the spider theme.

The bookmark took about 90 minutes total to make, however, it took me three days of frustration to get it done. I made the mathematical calculations, translated the pattern to a chart, made several swatches, tried three different yarns, needles, and numbers of repeats. The pattern is a 12-row repeat and rows 8 and 12 were just not coming out right. Could Barbara Walker have made a mistake on it or was there something I just wasn’t getting?

I love the mathematical side of knitting, so I don’t mind problem-solving. It’s just that I was stressed out because the deadline to send the package had already passed and I had a lot of other things to do at the same time.

I’ve named this bookmark after the main character of a series of West African folk tales who is a mischievous spider.
Posted by Guaria del Bosque at 20:57 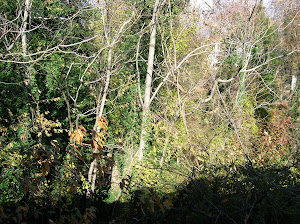 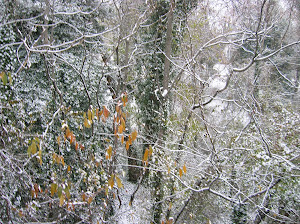